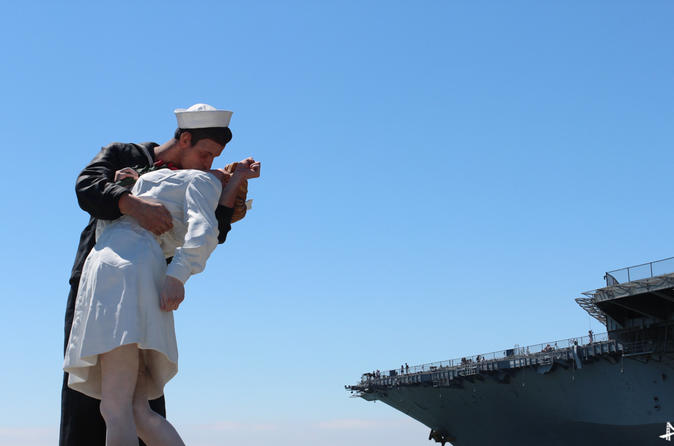 Spend the day in the beautiful San Siego, visit Old Town La Jolla, Coronado and enjoy and afternoon boat tour through the bay.

Today we head down the scenic coastal I-405 and I-5 heading to the beautiful city of San Diego, passing by the Naval Base of San Diego and their training grounds; this is where the Navy Seals train. In 1542, thinking this was an Island, Juan Cabrillo originally named the area San Miguel, and the Island California,  60 years later the explorer Sebastian Viscayno changed the name of the city to San Diego.  We take the route originally carved by the Spaniards when they first came to this area, El Camino Real, with the original lampposts along the route, constructed between 1542-1821, originally connecting the 21 missions.

Our first stop is in La Jolla and the La Jolla Cove, taking in the amazing ocean views, the wildlife and the marine sanctuary from above (no swimming).  We then head to Old Town, established 1769, this was the first permanent Spanish settlement founded by Father Junipero Serra.  San Diego is also the site of the first of 21 Missions, Mission San Diego de Alcala.  We will stop for lunch at the Seaport Village next to to the Unconditional Surrender Statue and Park with its’ cherry blossoms and location of the USS Midway.  After Lunch, we go on a one-hour harbor cruise through the San Diego Harbor.  From here we head to Old Town where we spen some time then we head back to Los Angeles to be dropped off at the same pick up location

Spend the day in the beautiful San Siego, visit Old Town La Jolla, Coronado and enjoy and afternoon boat tour through the bay.

Our system is experiencing some issues at this time. Please try again later.